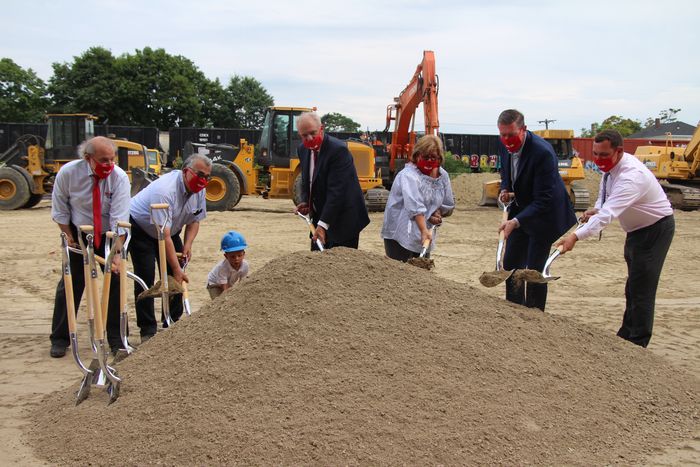 By Michael Bonner | mbonner@masslive.com
What lies beyond the pandemic? MassForward is MassLive’s series examining the journey of Massachusetts’ businesses through and beyond the coronavirus pandemic.

The coronavirus pandemic has done all it could to dismantle Worcester’s Renaissance. Dozens of restaurants across the city navigate through uncertain futures. Concert and performance venues have been emptied for months. College campuses are vacant.

On Thursday, though, Worcester fought back with a pair of ceremonies that injected life into the city’s future.

City officials celebrated as the final beam of steel became part of Polar Park in the morning. A few hours later, many of the same faces broke ground on Table Talk Pies’ 120,000-plus square foot bakery within the former Crompton & Knowles Complex in the Main South Neighborhood.

“Its perfect bookends to a great day in Worcester,” City Manager Edwards Augustus Jr. said. “I’ll tell you, 2020 has been a sucky year in Worcester, a sucky year in the country between COVID and all sorts of other challenges, but it’s so nice to have days like today where we can remind ourselves of all the progress that’s going on in the city.”

Despite all the speed bumps 2020 laid out in front of each project, officials said Polar Park is scheduled to be complete on time in April of 2021, and Table Talk Pies’ facility should open in August of 2021.

When the company announced the project in January, the original completion date for the new bakery was June of next year.

“The one advantage we have is people love to eat pies. No matter it’s good times or bad times,” Kokkinis said. “Pies are a comfort food.”

Kokkinis compared the pandemic to the Great Recession of 2008 when the company continued to invest in itself.

“As long as the virus doesn’t impact people’s desire to eat pumpkin pie at Thanksgiving, I think we’ll be OK,” Kokkinis said.

As the city prepares to climb out of the pandemic in 2021, Table Talk Pies will be adding at least 50 jobs as it moves to its new home.

Table Talk says it plans to employ 180 full-time operation staff at the new location, including 130 current full-time production staff that will relocate from the Kelley Square bakery. More than 60% of Table Talk’s employees live in Worcester.

As part of the Tax Increment Financing policy with the city, all employees would earn $15 an hour within six months after beginning at the company.

Table Talk Pies was founded in 1924 in Worcester by Theodore Tonna and Angelo Cotsidas, two Greek immigrants who came to the U.S. looking to better the lives of their families.

Kokkinis said the company never wants to lose sight of its roots, including its current home. The company has started to speak with parties potentially interested in the Green Street location, nestled next to Polar Park.

“Now that we finally figure out our home and stuff, we’re starting to look at that a bit,” Kokkinis said. “All I know is we want to make sure Table Talk still has a presence in Kelley Square and that our store is still there. That old building, 153 Green Street, that means a lot to us.”

As it searched for the location, Kokkinis’ mother had only one request: that Table Talk Pies remain in Worcester.

“I can finally go back to telling my mom, ‘I listened to you this time,’” Kokkinis said.