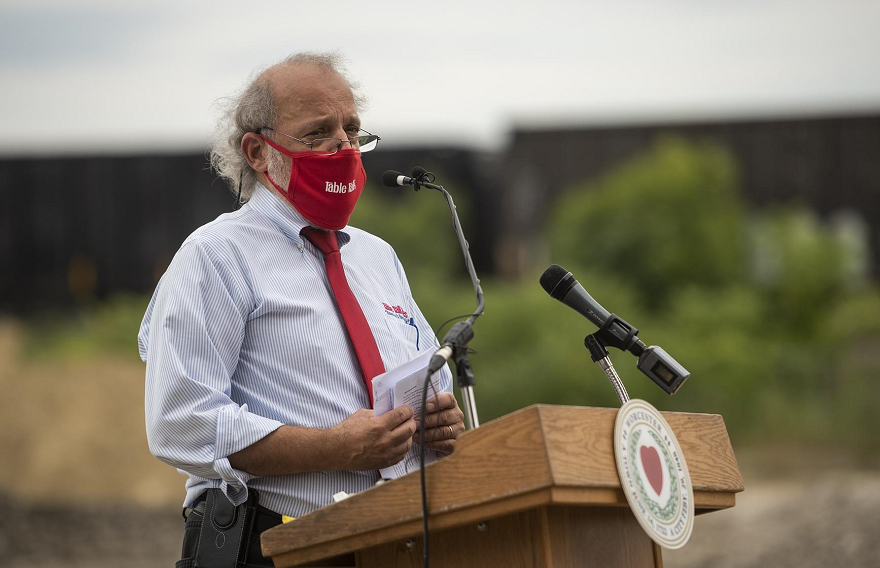 Joined by local and city officials, Table Talk kicked off construction of its vast new manufacturing space that will stretch across 8 acres in the neighborhood with a traditional groundbreaking ceremony. Most of the buildings at the former Crompton & Knowles facility have been torn down, and seven different parcels attached to various owners have been combined to make the project work. Nearby Gardner Street – the facility will be called the Gardner Street Bakery – will be lowered under the railroad bridge to accommodate expected tractor-trailer traffic.

Table Talk President Harry Kokkinis said construction equipment is here and ready to start digging the foundation of the new facility. He said in just about a year, the facility should be complete.

Kokkinis said the goal for Table Talk in its search for a new headquarters was always to stay in Worcester, but “pad-ready” sites that could accommodate the company’s needs were hard to come by. He said it took some convincing, but working with the city and the state on the various moving parts of the project, including a tax increment financing deal and funding to facilitate the Gardner Street redesign, is coming to fruition. Around 70,000 square feet of old, rundown factory buildings have been demolished, he noted.

“This is 8 acres of open space in the middle of Worcester,” he said. “Where else could you find it?”

Mayor Joseph M. Petty said the project is an extension of industrial and community-level progress the neighborhood has made over the years, including the South Worcester Industrial Park, in which Table Talk already operates a facility.

City Manager Edward M. Augustus Jr. noted the project is an example of the city helping facilitate development outside the downtown area – he said that’s an unfair criticism, considering its efforts to attract projects like Table Talk and the biomanufacturing initiatives on Belmont Street.

“We are cooking on all burners here in the city of Worcester,” Augustus said.

He said that around the time the Pawtucket Red Sox were negotiating with the city for what would become Polar Park – right next door to Table Talk’s current Kelley Square headquarters – the city approached Table Talk to explore the idea of moving away from Kelley Square, where game-day crowds and traffic could impact the company’s ability to get trucks out on the road.